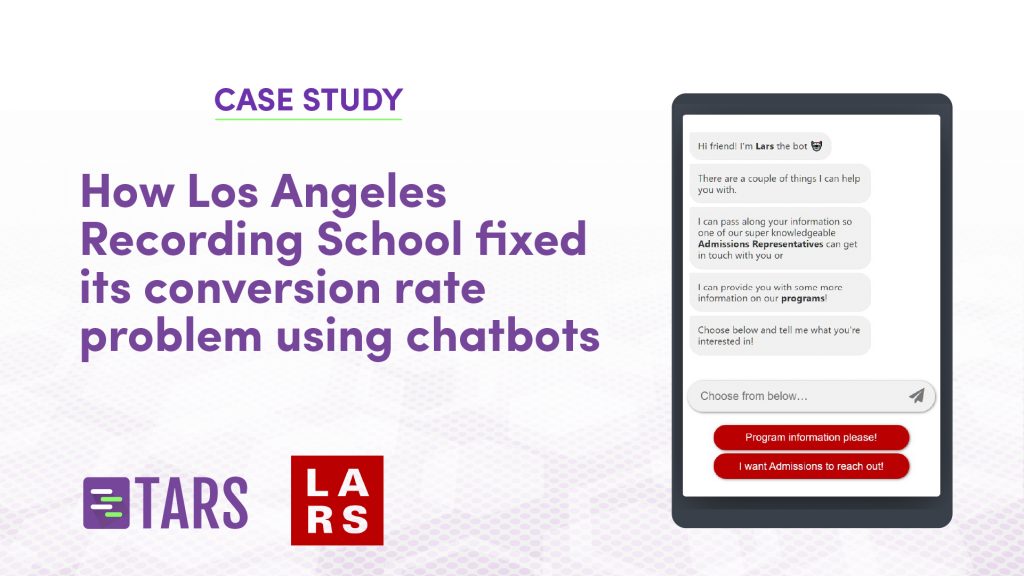 Located in the heart of Hollywood, LA Recording School is one of the world’s premier audio production schools. They offer associates and bachelors degrees in audio production and music production. Students that graduate from these programs go on to work in radio, podcasts, television, film, music, and pretty much any other industry that relies on audio and music to produce an end product. Like all modern institutes of higher education, LA Recording School drives applications for these programs through its digital marketing efforts. We spoke with their marketing team about how they use chatbots to increase the number of applications they garner through these campaigns.

The landing pages for individual programs contain information about LA Recording School, the specific program being advertised, and a lead capture method to collect lead information from prospective students who want more information.

Collected lead information is then sent to LA Recording School’s Salesforce dashboard, where their marketing and sales automation workflows kick into action. They follow up with leads over email with more information about the program they were interested in, open houses, and more resources aimed at convincing leads to submit an application.

The user actions that a prospect has to go through to achieve what they want to on a traditional landing page are unengaging. People do not have the attention span to read through large pieces of text and they most certainly do not enjoy filling out forms, and yet landing pages rely on both to capture leads. The end result is that even if your prospects like what you have to offer, many of them will drop from your page because of the poor user experience of traditional landing pages.

Chatbots as a Solution

To fix their lead capture problem, LA Recording School adopted a chatbot-driven approach. Their reasoning was that unlike forms (which are unengaging), chatbots deliver a dynamic, two-way customer service experience that prospects actually enjoy. Put simply, people would much rather talk to a customer service rep (even if they’re automated) than fill out a form.

With this consideration in mind, the LA Recording School marketing team used the Tars no-code builder to build a chatbot that gives prospects basic information about their programs and more importantly, captures lead information from those who are interested in the program.

The chatbot is deployed on the LA Recording School website and program-specific landing pages as a widget that is universally accessible (i.e. prospects can access the widget regardless of where on the website they navigate).

When users interact with the bot they are asked for their citizenship status, country, state & zip code, the year they graduated from high school, and finally takes legal consent to contact them using the information they shared on the bot. These details along with the UTM parameters on the parent page are sent through an API call to Salesforce (just like the forms did before).

Since making the shift, the results have been astounding. LA Recording School has seen an increase in their conversion with their chatbot currently converting a staggering 13.78%, which is considerably higher than the industry average.

Bertling is a global logistics and shipping company, renowned for managing complex…

How HomeWarrantyReviews.com Increased Their Conversion Rate By 20% Using A Chatbot

Founded in 2006, HomeWarrantyReviews.com is the leading aggregator of consumer-sourced, home warranty…

Imagine you’re at a black-tie dinner — you know, the kind where…